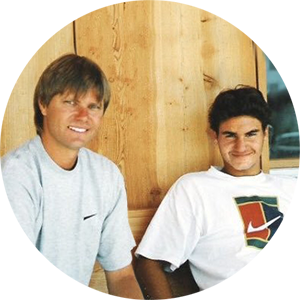 I was sent this story by a client a few years ago and it has stayed with me ever since. What a wonderful human being is Roger Federer, such a touching and inspiring gesture. This what success is for me.

Every year, at the Australian Open, behind Roger Federer’s coach sits an elderly couple ? There is a story to this couple, and it shows what a good human being Federer is?

The couple are Bob and Diana Carter, the parents of his first international coach, the Australian Peter Carter.

Federer was just nine when Carter took him under his wing. In 2002, in a terrible tragedy, Carter died in a car accident while on a vacation with his wife. He was only 37 years of age.

The story goes that Federer (then 21) was so affected by his coach’s death, he ran through the streets of Toronto (where he was playing that day), bawling his heart out.

Carter had recognised Federer’s genius at a young age, and was determined to make him an all-time great.

He was not Federer’s first coach, but the one who took him from relative obscurity in Basel in Switzerland to the threshold of international greatness.

Every year since 2005, Federer’s team sends an all-expenses paid itinerary to the Adelaide-based couple - first-class air tickets, bookings in the same hotel as Federer, food, winner’s parties and even commiseration parties in Melbourne.

And they sit in Federer’s box at the Rod Laver Arena, supporting him as if he were their son.

They see their son Peter in him and Federer never forgets the Carter family’s role in his life and career.

But is he not one of the greatest human beings to have graced the sport of tennis?